Sorry dear customers! Admission is currently only possible after prior confirmation by phone (04298-93 90 24) and according to the current Corona regulations.
Trading with Australian goods for more than 30 years
Please select your delivery country.

R.M.Williams - The Longhorn Brand. It was during the 'Great Depression' of 1930 that the founder of the company, barely 20 years old at the time, earned his living in the deserted outback of South Australia. Here he worked in surveying teams and as a well digger. At the large Outback Stations and Cattle Camps, R.M. later learned leather crafts and many other Bush skills. Around 1930 Reg Williams began manufacturing saddlery and boots in No. 5 Percy Street, Adelaide. The Longhorn became a trademark for fit, quality and durability. R.M. Williams became an Australian legend. 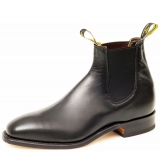 Register for our newsletter

All prices incl. value added tax plus, shipping costs are addtional
** Applies to deliveries to Germany. For delivery times for other countries and information on calculating the delivery date, see hier
modified eCommerce Shopsoftware © 2009-2022